Every human being is unique. Each of us has a unique DNA, a unique experience of life, and a unique outlook to the future. Nonetheless, as a species – Homo sapiens, we all share some traits at different degrees: we tend to over-generalize, we procrastinate, we are curious, etc. Moreover, if we scan the history and the geography of human societies, we notice some patterns in the characters: the leader, the soldier, the scientist, the rebel, the traitor, the altruist, etc. We don’t find it difficult to compare one or more characters of a story to other characters in other stories…

The study of human behavior and personality has gained increased attention in the last two centuries and has evolved from pseudoscience theories (such as phrenology and physiognomy) to an established branch of psychology.

In a previous post “Who Are You, Really? – Brian Little“, the personality is defined as the result of the following determinants: biogenic (inherited genes), sociogenic (culture and values) and idiogenic (individual decisions and will) traits. The OCEAN model for human personalities and behavior was used as a tool to assess the basic personality traits.

Many other models exist in the literature. In this post, the following personality models are presented: MBTI, FIRO-B, SDI, and DISC. These models are widely used today in the corporate world (in hiring and management), and they are part of some management programs. All the models are based on psychological research studies and are formulated as introspective self-report questionnaires that can be found online.

The  Myers–Briggs Type Indicator (MBTI) is a personality assessment model that was constructed by Katharine Cook Briggs and her daughter Isabel Briggs Myers. It is based on the conceptual theory proposed by Swiss psychiatrist Carl Jung. The personality traits are grouped into four categories:

This produces 16 personality types as shown in the figure below. An individual can fall into one type, or between 2 or more types, depending on its score. 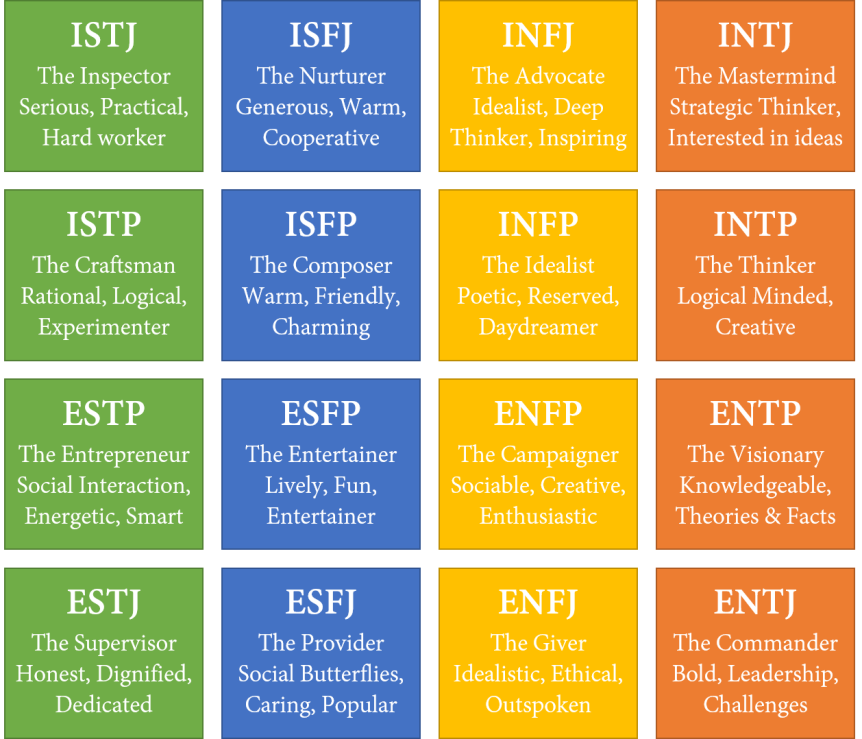 FIRO-B stands for Fundamental Interpersonal Relations Orientation – Behavior. Introduced by William Schutz in 1958, this theory explains the interpersonal interactions of a local group of people. It models the personalities of individuals based on 3 fundamental needs: Inclusion, Control, and Affection. These needs are either expressed (initiated and practiced by the individual) and/or wanted (the individual is waiting for them).

The resulting scores of the FIRO-B test are filled in the matrix below. The totals of the columns and rows are then used to assess the personality traits of the individual along the 3 dimensions: Inclusion, Control and Affection.

The Strength Deployment Inventory (SDI) is a personality test that is based on the work of Elias H. Porter. The personality traits are grouped into 3 categories (colors): blue, the altruistic, green, the analytical and red, the competitive. Each individual has its own spectrum of colors. One advantage of this test is the spectrum of traits is visualized as shown on the figure below. Another advantage of this test is that it considers 2 situations: 1) when things are going well and 2) in case of conflict. The behavior of an individual may not be the same in both situations.

DISC- what is your bird ?

DISC is the acronym for Dominance, Influence, Steadiness, and Conscientiousness. It is a behavior model that was created by the industrial psychologist Walter Clarke in 1956, based on the work of psychologist William Moulton Marston.

In his book Emotions of Normal People, published in 1928, Marston argued that the human behavior falls in the aforementioned 4 types, as shown on the figure below. Note that, in its popular and simple version, DISC is sometimes called DOPE, for Dove, Owl, Peacock and Eagle. These birds are used to illustrate each personality type.

The OCEAN model discussed in a previous post is recalled here for completeness. This model is widely used, and called the Big Five Personality Traits. It reduces the number of traits (factors) to 5 groups, for simplicity. These 5 traits are represented by the acronym OCEAN, for Openness to experience, Conscientiousness, Extraversion, Agreeableness, and Neuroticism. The following figure shows how people can be positioned across the spectrum of each trait.